The families here are building fences and breaking barriers. How are they doing it? By giving a beloved and historic park in Chehalis new life, so it can be enjoyed by all.

Penny Playground is now open and thriving, after more than a year of anticipation. Though the old playground was well-loved, it was outdated and inaccessible to many. In a spectacular show of team effort, the Chehalis community has completely overhauled this playful corner of Recreation Park. 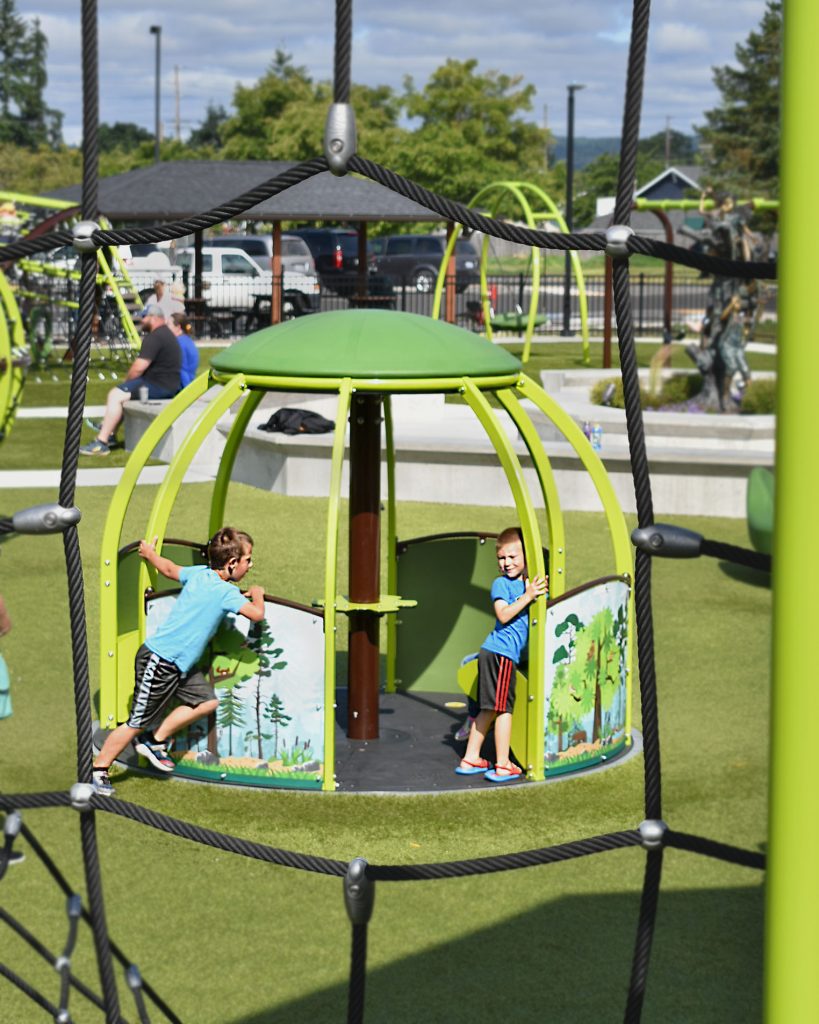 Recreation Park and Penny Playground are integral to Chehalis’s culture and history. The park was built in 1954 and saw continuous improvements and additions over the years, including ball fields, a pool, roses,[1] and, briefly, the famous McKinley stump.[2] In 2014, the pool underwent extensive renovations and re-opened as Gail and Carolyn Shaw Aquatics Center. The athletic complex was updated in 2020[3]. Then, eyes turned to Penny Playground.

Penny Playground was added in 1993 and enjoyed for 26 years, outliving its expected 20-year lifespan. After decades of use, the playground desperately needed TLC. The nostalgia-inducing wooden design offered limited accessibility and safety. Water accumulation was an ongoing problem in and around the park. The pea gravel fill was hazardous and limiting, especially to visitors with mobility challenges. Parents wanted more security, including improved line of sight and a perimeter fence.

So, the City Council put out a call for help, and the community answered.

Lilly Wall, Recreation Manager for the City of Chehalis said that, at first, “We thought about replacing it the way it was.” However, research and community input vastly changed their direction.

“We wanted a place where ALL kids could come together and play, [without] barriers,” said Wall. Thus, the designing commenced. 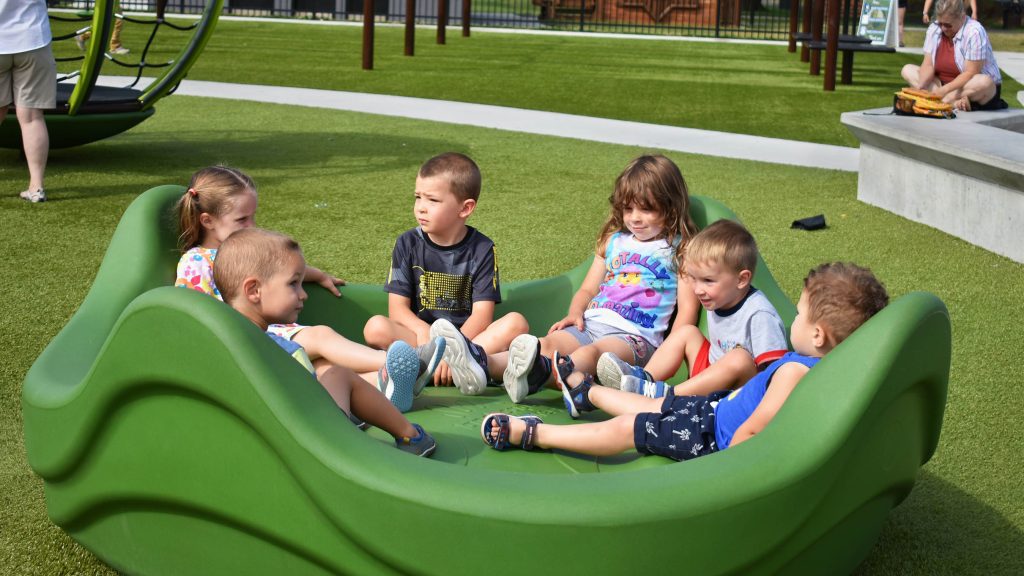 Safety isn’t the only thing the playful green playground offers. Park designers also included wheelchair-accessible toys, ramps, and new swings. Differently-abled and neurodiverse children alongside their friends and play in the sensory areas. A new roller slide dissipates static electricity so it doesn’t interfere with hearing aids – a problem most parks don’t address.

Executive Director of the Chehalis Foundation Jenny Collins said, “We wanted the opportunity for kids who have hearing devices, walking devices, or wheelchairs to be able to access and play on the playground.”

And the opportunities abound. The excitement and sense of community are palpable at the park, where children and families of all backgrounds and abilities can be seen enjoying the space together. Parents and kids alike can’t get enough of the new ziplines, slides, and towers.

“It’s pretty exciting when you’re down there and you see people using it the way you envisioned,” said Wall. 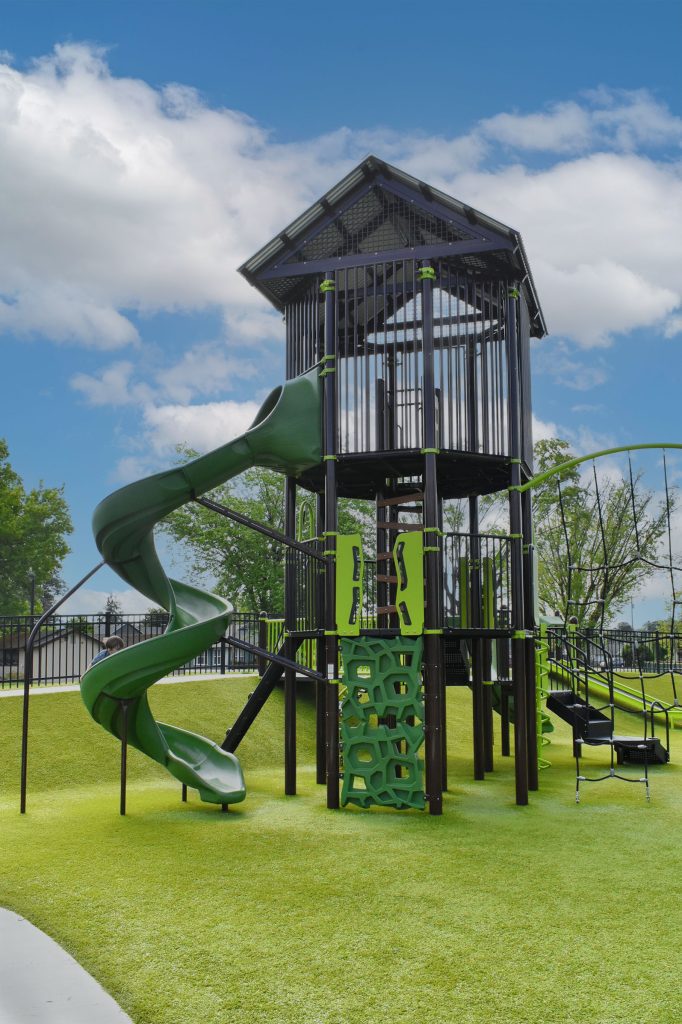 The Helping Hands (and Pennies)

While the Chehalis City Council spearheaded the project, the Chehalis Foundation handled much of the fundraising with the help of the Ingwersen Trust. A fundraising committee, led by a husband-and-wife team, coordinated the Fence Penny drive. Local rotaries raised funds through auctions, and Mike and Sue Austin worked with elementary schools to bring back the penny drives that the park was originally named for. Connie Bode was also instrumental in fundraising efforts.

Countless others pitched in, including generous anonymous donors, new community members, businesses, and families. Their efforts are honored in the park through a series of informative placards, commemorative walkways, and a preserved display of the old wooden playground.

Penny Playground in Chehalis is the largest accessible playground for 70 miles, although other parks in the county are now following suit with equipment and safety upgrades. Families from Lewis County and beyond are ecstatic to have an inclusive gathering place, where all their children can safely play together.

“Creating this space for everybody that’s free and accessible [is exciting]. It’s amazing that our small town has a playground of this caliber,” says Jessica Homyack, co-chair of the fundraising committee

Recreation Park’s rich legacy has been revitalized for the next several generations with the Penny Playground renovation. It’s another testament to the commitment and love in the community of Chehalis, and another step in our area’s prosperous growth. Chehalis now has its eyes on Westside Park, Alexander Park, and the Dobson-McFadden Trail for future improvements, so families can look forward to even greater fun and inclusivity! 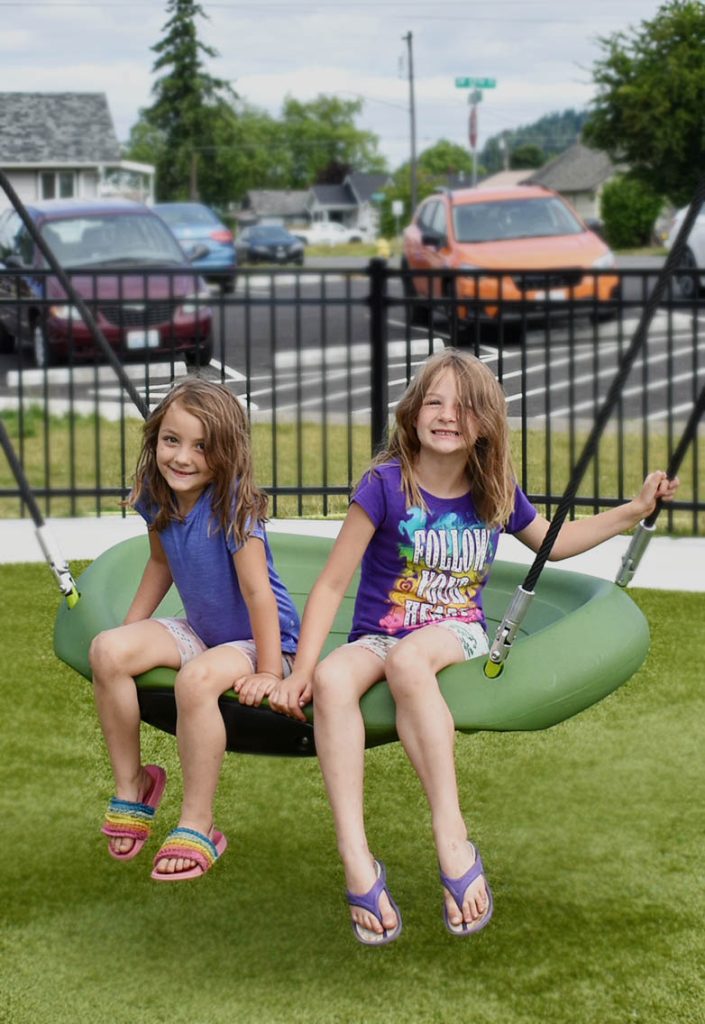 Wall also encourages guests to support the park by simply cleaning up after their visit. Problems can be reported to the Parks and Recreation Department at (360) 748-0271, or to Central Dispatch at (360) 740-1105.

While you’re here, don’t forget to check out what else Chehalis has to offer, like the neighboring aquatics center, delicious local grub, our Rails to Trails program, or our one-of-a-kind Chehalis-Centralia Railroad and Museum. 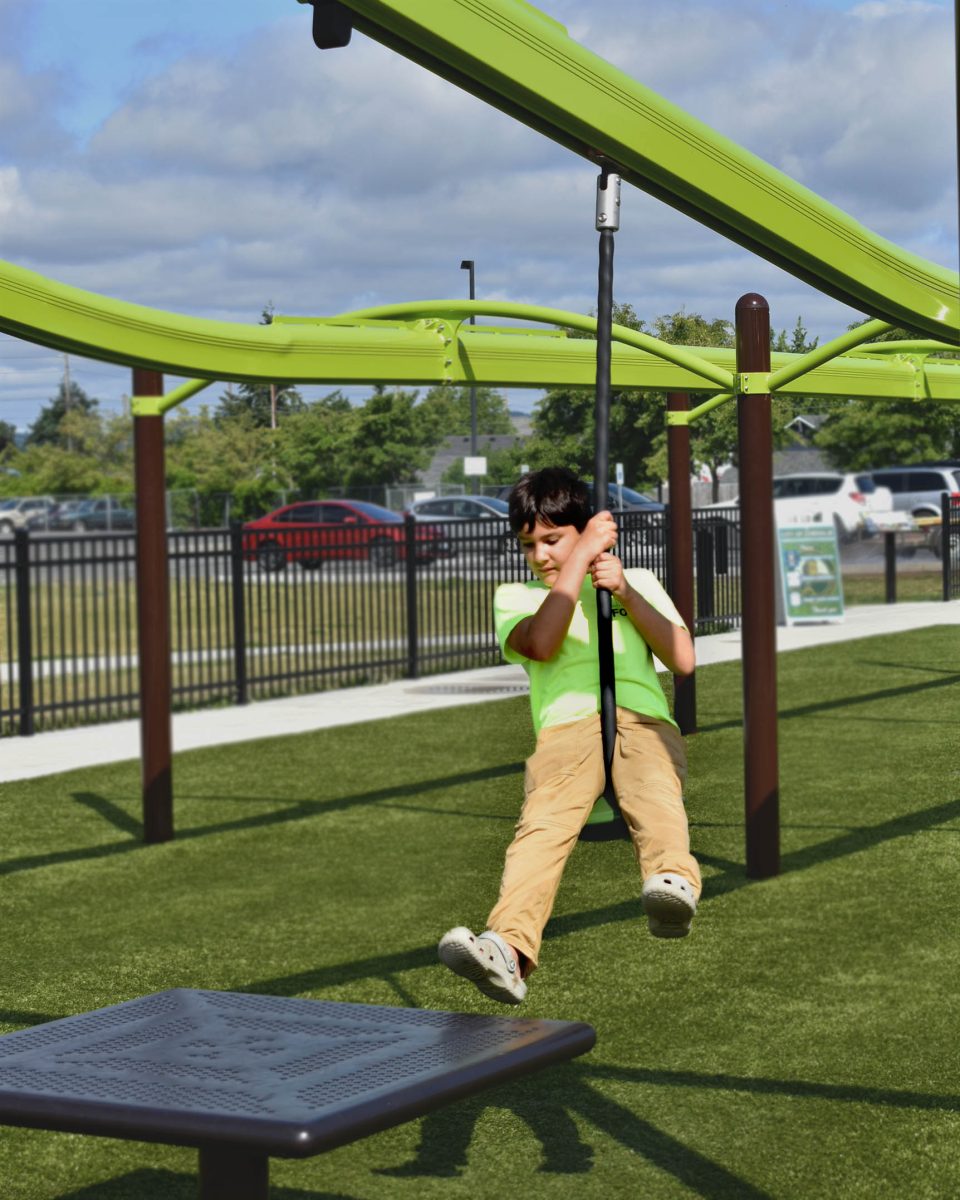 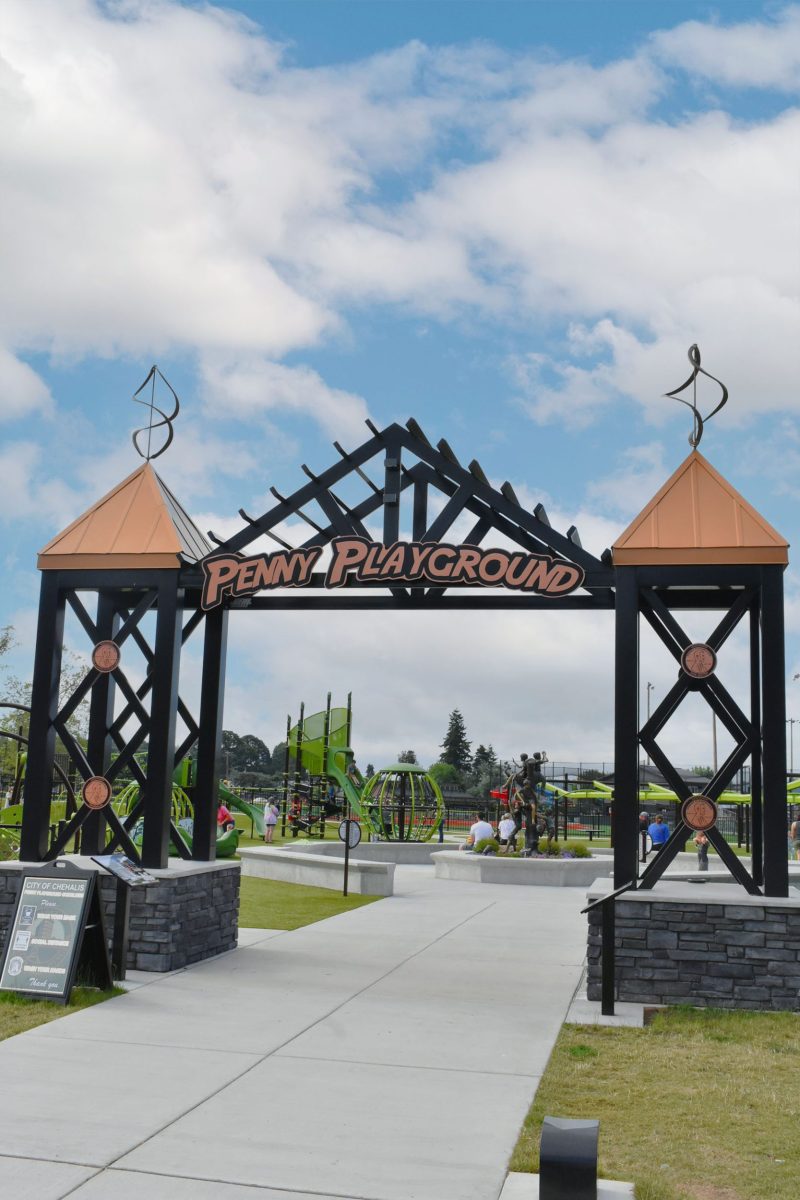 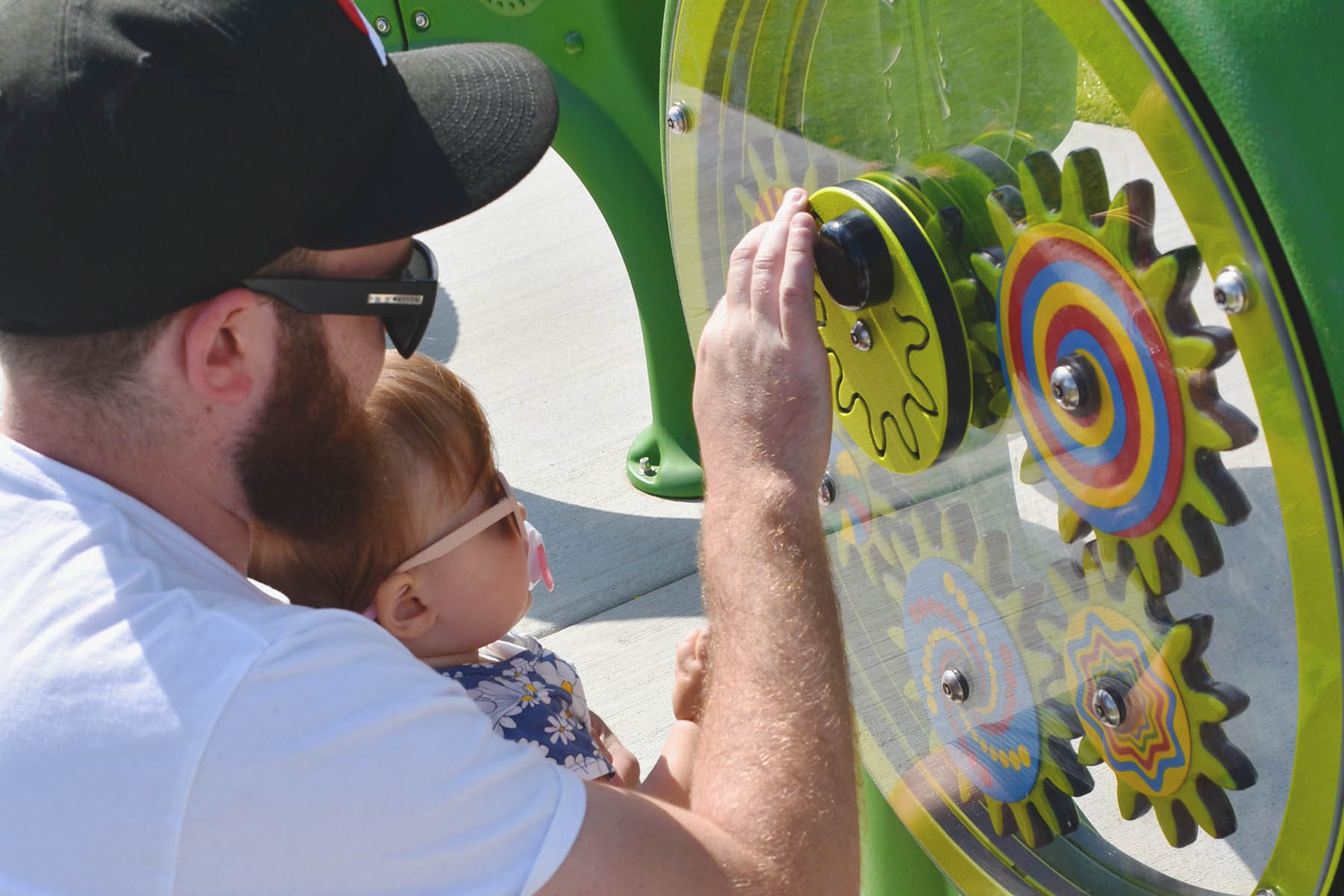 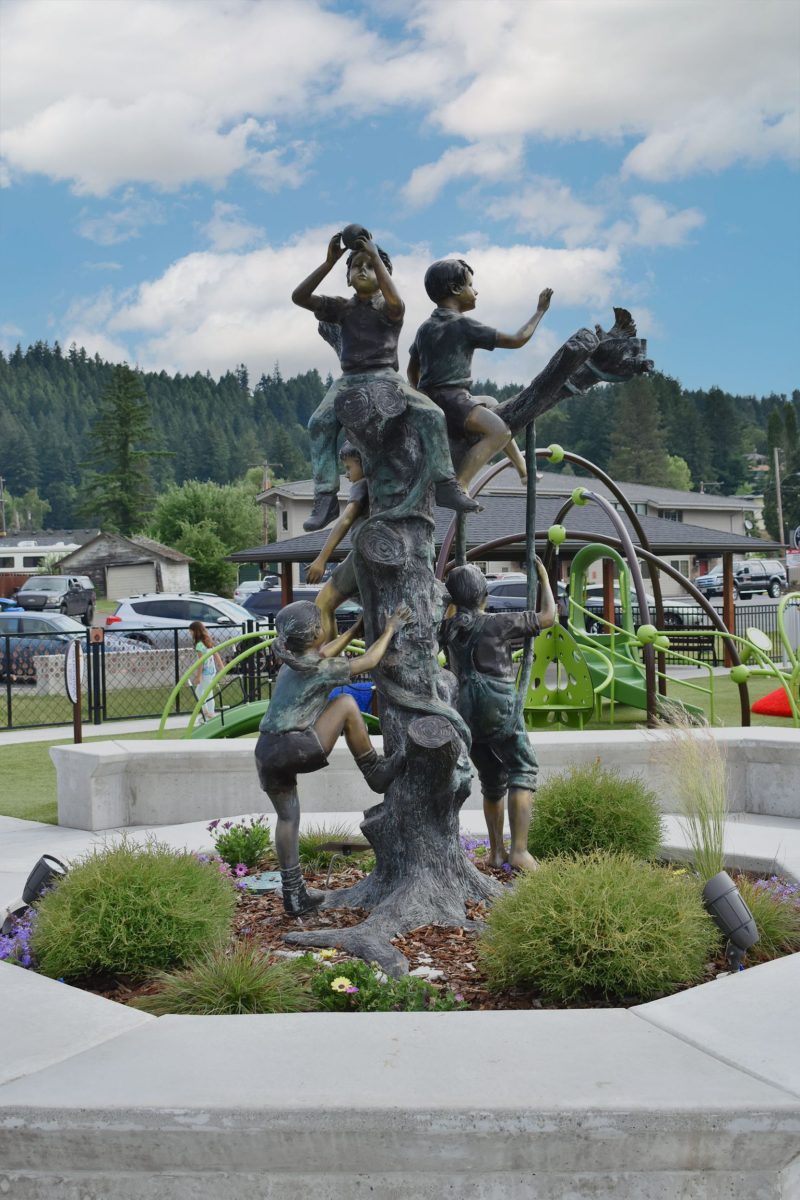